2016 marked three consecutive years where a drone has taken to the skies over Campbellton, New Brunswick, for a bird’s-eye view of some of Canada’s most awesome scenery.

This time, the quadcopter was the “new and improved” DJI Phantom 4. The $2,000 unit travelled faster, further, and higher than previous models. At the very end of this piece is a short clip of the Phantom 4 in action.

The drone also has a better digital camera. The result? Sharper photographs and because the camera now has a regular lens — as opposed to a wide-angle lens, like those on previous Phantoms — images no longer have that distorted “fish-eye” curvature.

TO VIEW THE PHOTOS FULL BLOWN [as in a fill-your-screen beauty], simply click on them … and wait for the download. They’re all fairly high megapixels.

Would you like copies for personal, educational or non-profit use? Some are cool screen savers. No problem. Help yourself. You may find your next screen-saver.

All photos were taken in early September 2016.

From above Dover Street, this view of Campbellton. The mountain to the left, with the peculiar name of Sugarloaf, has been a distinctive feature for millions of years.

Here’s a side view of one of Campbellton’s best-known landmarks: two painted crosses on the face of the mountain. The memorials are a sombre reminder of a double tragedy on a frosty day in November 1924 when two young women [sisters] plunged to their deaths. The crosses mark the spot where searchers found their bodies.

The face of the Sugarloaf. No doubt the crosses have prevented many from climbing the front. The safest route to the top is a path on the east spine of the mountain.

The lookout alongside a flag pole erected by members of the Royal Canadian Mounted Police [RCMP].

With the Sugarloaf’s shadow pointing the way, an early morning shot of the fog-covered Matapedia Valley. In the old days — and I mean well before my time — fog was also known as ‘sea smoke.’

Like large cotton balls, a thick fog blankets much of the Restigouche River, hiding the bridge.

Sleepy Campbellton. The rising sun will soon erase the fog.

But until that happens, for the folk on Duncan Street West … fog to the right, fog to the left of them. This photo was taken with a Sony 4K camcorder, not a drone. 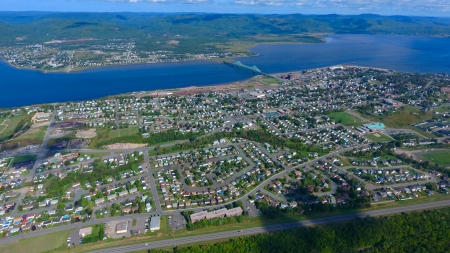 This is where Campbellton gets its water [southeast of Sugarloaf Mountain].

Sugarloaf Park located just southwest of the mountain. Ski runs can be seen to the left. 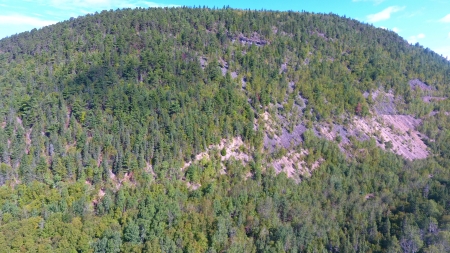 The not-often-seen south side of Sugarloaf Mountain. Compared to the front — with its steep, jagged cliffs and two crosses — the back appears uninteresting. Evergreen trees, bushes, and foliage — nature’s makeup — hide the real Sugarloaf. 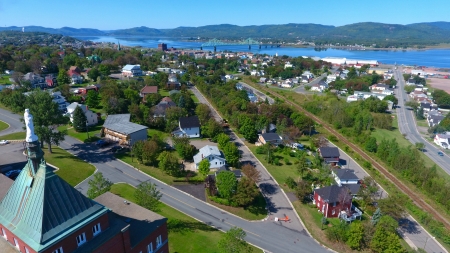 The red-brick building with the statue perched high is the former ‘Mother House’ for many nursing nuns who worked next door at the old Hotel Dieu Hospital.

The regional hospital [with the psychiatric hospital in background] located at the southern edge of the city. It’s in this forest where two RCMP officers captured one of America’s Most Wanted, killer Richard Lee McNair of Duncan, Oklahoma, in late October 2007.

A senior’s complex on Dover Street. The six-storey building is Lou Bursey Towers, named after a popular school teacher and high school principal.

The new French school under construction in the southeast part of town. 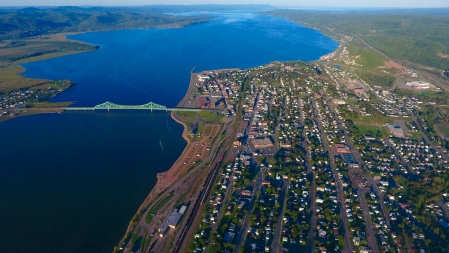 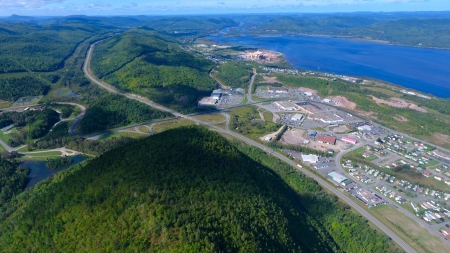 From Sugarloaf Mountain, we see the west end of Campbellton, Atholville, Tide Head and Matapedia Valley.

No pictorial account of Campbellton would be complete without a snapshot of the Charles Van Horne Bridge, constructed in the early 1960s. The two-lane bridge must be one of the most photographed bridges in North America. Have taken 50 million snaps of it myself. 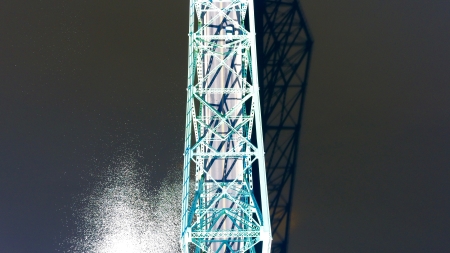 This is how a bird sees the bridge. The water just looks black. It isn’t.

Mother Nature — the original Photoshop. Just look what She did to Pointe-a-la-Croix, Quebec. Gonzo!

Campbellton from east to west. The plume of white smoke in the distance is from the pulp mill in Atholville. 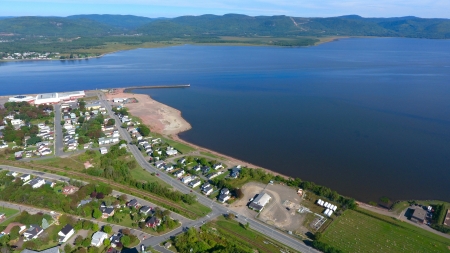 The wharf. In “days gone by,” the wharf was a busy place with sailing ships coming and going. It’s the furthest thing from young people’s minds but large, wooden ships were once constructed in Campbellton. The last, in the 1920s, was named after a young, local soldier who died in a British hospital from poisonous gas during World War One.

Richardsville [now part of Campbellton]. A suburb, if you will.

The Atholville pulp mill is alongside a graveyard for the first European settlers, mostly from Scotland. The first immigrants also came from England, Ireland, and France. The Mi’Kmaq [Micmac], the local Indigenous People, had treated the foreigners/invaders well. Notice the line-up of transport trucks on the road that snakes by the graveyard. 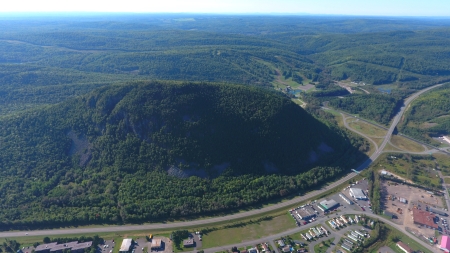 The higher one goes, Sugarloaf Mountain looks like a big hill.

The west end of Campbellton meets the east end of Atholville.

Check out that train! Wow! The fly swatter-shaped area is the ever-expanding cemetery.

West-central Campbellton. The street that curves to the left is Val-d’Amour Road.

The south-east part of town. The road to the far left is the lower part of Sunset Drive [formerly Lilly Lake Road].

Like a giant bar code to be scanned from space, Campbellton’s latest tourism draw is an RV park overlooking the Restigouche River and Quebec. 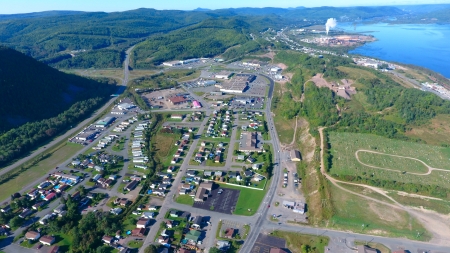 When I went to grade school [in the 1950s and 60s], this area of Campbellton was known as “Little Montreal.” 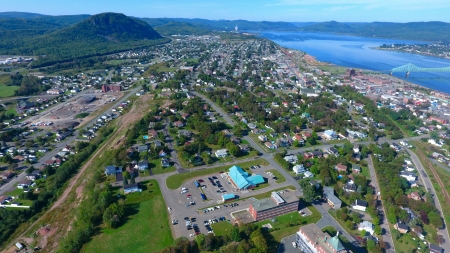 I never get tired of seeing photos of Campbellton, the Restigouche River, the bridge … and Quebec. 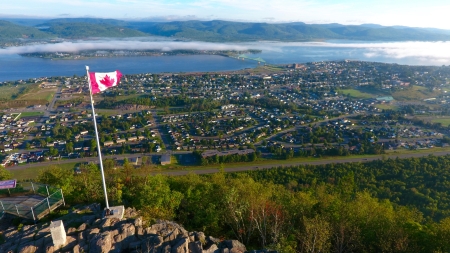 The morning sun glistens off the Restigouche Estuary, dissipating the fog.

A few minutes’ drive from Campbellton is the Village of Tide Head. Looking further west, is the beautiful Matapedia Valley.

This photo was taken near Morrissey Rock between Tide Head and Flatlands. These islands are famous for their fiddleheads. The hump in the distance [top centre] is Sugarloaf Mountain. 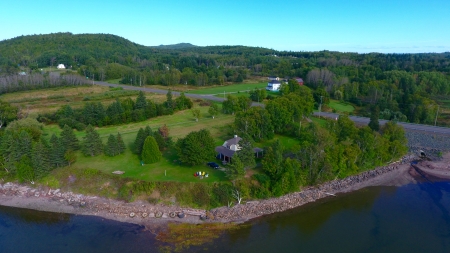 The Village of Point la Nim with Dalhousie in the distance.

The Acadian Village of Petit Rocher [west of Bathurst].

Beresford [also west of Bathurst] where there are almost as many cottages as regular houses. The setting sun gives the photo a ‘National Geographic feel.’

Here’s a 4-minute YouTube video on video — not photos — of Campbellton aerials:

Here’s an 8-second clip of the DJI Phantom 4, the drone which took these photos. This image was captured by the iPhone 6 Plus cell phone in the ‘slow motion’ mode.