I recently spent some time with two veteran broadcasters, both radio reporters. One was a friend; the other, a foe.

And get this: they had the same address — a rural cemetery.

The welcome sign is a bit misleading. True, the church is in the bedroom community of Leduc [just south of Edmonton, Alberta] … but the cemetery is in the sticks in a neighbouring community.

If you travel the Queen Elizabeth II Highway north towards Edmonton, approaching the industrial hamlet of Nisku, you’ll notice on the East side of the road a two-storey factory where fitness machines are made. That’s Flaman, “Your Fitness Equipment Headquarters.” On the side of the building is a most realistic mannequin [a man] that appears to be walking on a treadmill. Cute.

Just north of the property is a small grove of trees and on the other side of the trees — hidden from view of those zipping along the four-lane highway — is a tiny cemetery with fewer than 100 neatly kept graves. [If you want to plug 2502 Sparrow Drive, Nisku in your GPS device, you’ll find it.]

Most cemeteries are quiet, but not this one. Like the mannequin on the treadmill, the traffic never stops. 24/7.

It’s at St. Peter’s Lutheran Cemetery where popular Edmonton newscaster Warren Henderson was ‘laid to rest’ on a cold day in early March 2006.

Front and back of Warren Henderson’s tombstone. Photos by Author on 1 September 2018. Click to enlarge.

Warren was my work colleague and friend. For several years, we worked together at 630 CHED Radio, a news and information station in Edmonton. CHED was rated number one in a market of more than two dozen radio stations. Numero uno.

That ends my plug for CHED.

The radio station was part of Corus Entertainment, based in Toronto. Many staff members of Corus’ four stations in Edmonton [two AM and two FM] turned out for Warren’s sendoff.

Warren John Henderson, a native of Manitoba, was a veteran newsreader — and a darn good one. His newscasts were consistently clean without stumbles — and no screwups with hard-to-pronounce names.

“Smooth and authoritative” was how David Kirkham of CBC Radio in Edmonton once described Warren Henderson. “That guy is good!” exclaimed David, a silky smooth announcer in his own right. “He plays it right down the middle.”

David and I worked at the Canadian Broadcasting Corporation … just down the road from CHED, actually. When it came to ratings, our AM outlet was about mid-way … not king of the hill nor in the cellar.

We constantly monitored the newscasts of opposition stations to see if we missed something really big.

Few CBC reporters had much good to say about our colleagues at the ‘private’ stations — the know-it-all critics we were back then — but Warren was an exception. He sounded like he could be behind the microphone in New York or Sydney.

Mind you, this was the 1980s when radio stations actually had newsrooms. Nowadays, few do. They may have one or two ‘rip-and-read’ newsreaders, perhaps some who make phone calls from their desks … but not real journalists with assigned beats who tear out of the parking lot in a cruiser, stones flying, in hot pursuit of a scoop. Those days are long gone. They vanished along with cassette tapes.

Warren died on a Tuesday afternoon, February 28, 2006. He was on sick leave and had gone to a theatre. Warren was a big time movie guy. When the flick ended, the cleaners moved in and found Warren slumped over in his chair.

He died alone. Cause of death: heart attack.

We were all shocked and saddened, of course. But no one was really surprised. Warren hadn’t been well for some time.

Warren suffered from severe diabetes and doctors had to amputate a leg. I went to the hospital to see him shortly after his big operation. “I understand you’ve lost some weight,” I said in my best medical humour. Warren smiled … but not for long. He feared he might never ride his Harley again. How he loved that bike.

Several times I visited with Warren in the hospital … and once at an ABC Restaurant on Edmonton’s south side. This was about a week or so before he checked out. I arrived at the restaurant early. To make sure we had privacy, I picked a booth at the end of the aisle.

Warren finally arrived. He slowly made his way into the restaurant, one step at a time. When my friend plunked himself down on the padded bench he was out of breath as though he’d just completed a marathon. That wasn’t a good sign.

“Here’s a tip,” I said, “don’t bother trying out for the Olympics,” and without missing a beat Warren shot back, “you don’t have to worry about that …”

In spite of his medical challenges, Warren maintained a positive attitude.

We talked about shop and about life, as people in the last half of their lives are prone to do at times.

For dinner we ordered light meals with juice, soft drinks … and water. That in itself was worthy of a write-up in Ripley’s Believe It Or Not. Imagine. Two old reporters drinking — and no one got tanked. That only happens in Mormon movies.

For more than an hour we chatted. Some of it was ‘shop talk’ about Michael White, the Edmonton man and former Canadian soldier charged with murdering his pregnant wife, Liana. Warren had spoken with White on my cell phone. Without tipping his hat as to whether the accused was the culprit, Warren remarked that White “didn’t sound like a killer.” “But if he’s not a killer,” I added, “he’s either naive or stupid.”

We passed on dessert and continued to chat.

After half an hour or so we made our way to the reception desk — SLOWLY, mind you — where I picked up the tab. Warren wanted to pay but I told him I could afford it because I was getting some great kickback from the drug dealers.

I was kidding, of course. [The kickback was actually small.]

Then something happened that spoke of Warren’s character. Warren asked that I go on ahead to my car because he was sure he could make it to his vehicle on his own. “Screw that,” I said. I held onto Warren’s arm and we made our way across the dark parking lot to his shiny pick-up.

It was a bit of a walk. When we at last reached his truck, Warren rested his arms on the tailgate, taking slow, deep breaths. The man was so winded he could barely speak.

A middle-aged woman saw Warren in distress and rushed over to help. “Are you okay?” she asked. I did all the talking. “He’s fine,” I assured her, “he’s always like this when he’s drunk. He’ll be fine once he’s behind the wheel …”

Warren looked my way, was silent for a few seconds and with a slow smile, remarked, “That’s funny.”

Warren opened the driver’s door, sat down, gripped the steering wheel and fired up the engine. Before he pulled out of the parking lot, he glanced my way briefly and waved good-bye. I stood there until he was out of sight.

And yes, Warren made it home okay.

I’m not sure if Ms. Good Samaritan put in a call to 911. I didn’t stick around to find out. 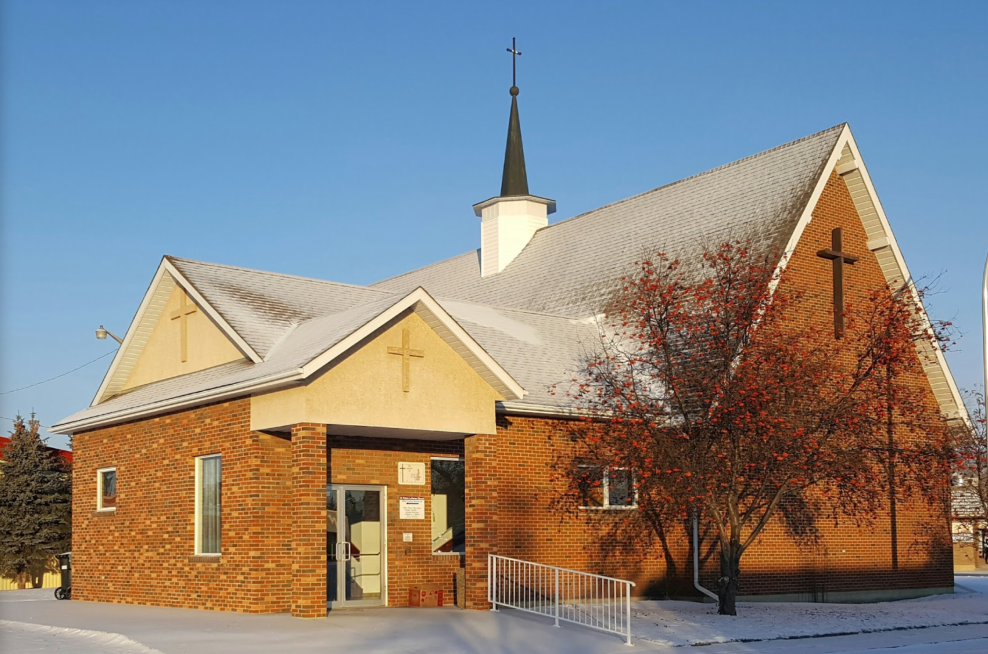 I last saw Warren in early March 2006 at the small Lutheran church in Leduc. He was dressed to the nine’s … but stiff and cold. It was surreal to see him stretched out in a coffin.

I took my place in line and when my turn came, I gripped Warren’s arm — the same one I held onto that night outside the restaurant — and thought, “You’re Home now.”

There’s ‘home’ and then there’s Home.

More than a few tears were shed that day. Some staff tried to hide their emotions — especially the tough reporters — but no one did a good job of it.

There was another reporter in that cemetery. He’d ‘died’ several years before.

I didn’t care much for him.

He was a news director who once ordered Trevor Popik, one of my top journalism students, not to give credit to newspapers as the source of a story Trevor was working on. That’s not right. Think of Commandment #8. And yes, lifting stories out of newspapers without giving credit is, unfortunately, a big part of our electronic news business but … it’s wrong just the same.

Where I’m coming from is that radio stations should either hire a proper number of reporters — or get out of the business of smoke-and-mirrors and pretend coverage.

And to make matters worse — according to the same student — the news director threatened to complain to the school where I taught part-time, the Northern Institute of Technology [NAIT] in Edmonton. Thanks a lot, pal.

The same reporter once phoned the newsroom to complain about a newscast I’d assembled and read. My top story was the United States’ military attack on Iraq. I quoted an online news outlet as saying the U.S. assertion that Iraq had ‘weapons of mass destruction’ was false, and that Washington knew it. [History would eventually show the news report to be accurate.]

The journalist was furious. “That’s the worst newscast I ever heard,” he shouted into the phone. The criticism was a blow because the reporter was no rookie; he’d been in the business for years. I wanted to tell him to screw off but I bit my tongue and let it go.

As fate would have it, we eventually worked alongside each other in the same newsroom. The reporter I’d previously locked horns with heard me out on issues such as plagiarism … and in the end — lo and behold — he began to credit his sources too.

And so things turned around with us. I began to like the guy. I was grateful I hadn’t lashed out that night. He was not only a genuine reporter, but a gentleman as well. And he gave a rat’s ass about the news business.

That same reporter also gave me a HUGE tip — a story that led to my station getting blanket coverage in newspapers and TV stations across North America. You can’t buy that kind of publicity.

And I’m sure station management was eternally grateful … for 15 seconds anyway.

So, the reporter had done a 180 and was not really the man I thought I knew. We were now teammates; we’d turned a negative into a positive and I guess we both grew from the experience.

In the end, we became solid friends. The reporter had my back and I had his, and you don’t hear that often in our business.

Who was this journalist??

His name appears on the email below that was circulated to station staff in July 2005. Click to enlarge. 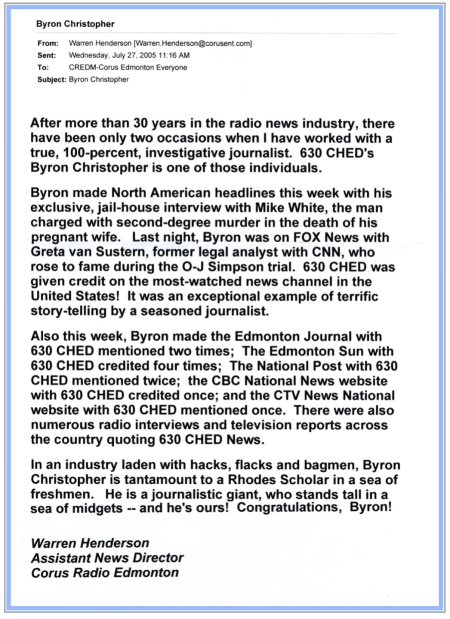 “Now you know the rest of the story.”

Rest in peace, Warren. Your listeners have not forgotten you. Nor have we.

14 thoughts on “A Tale of Two Reporters”