The 2020 US election drew worldwide attention with one party claiming victory while the other alleged election fraud — not unlike the ballot-stuffing that goes on in Third World dictatorships.

So, who really won??

The answer: NO ONE! Everyone — especially those living in the US — lost big time because the news media did not do its job. It was far worse than the public not being informed … people were simply manipulated big time. They were used.

The result is that a once-great nation is now sharply divided. The news media is partly to blame for the mess, and shame on them. Instead of accurately reporting facts — without bias — major news organizations took sides in their election coverage, a fiasco that has made the US media the laughing stock of the world.

A huge part of the problem was that reporters and editors became advocates, destroying what little trust the public had in them. Good luck in winning back that trust.

A QUICK OVERVIEW OF THE MEDIA LANDSCAPE

Over the last decade or so journalism has been bleeding heavily from some serious stab wounds. The cutbacks were brutal. Tens of thousands of reporters were thrown out of work.

On one level, I ‘get’ the layoffs: shrinking revenues, fat cat executives, shareholders demanding a healthy return, the rise of social media … on and on it goes. There were many knives.

Another massive wound is that neutrality is now sadly lacking in the business. I’m referring here to media censorship and partisan/biased reporting. The unfairness is often way over the top. And it’s so common — and therefore so noticeable. It’s hardly a secret that the media has an agenda … its main job isn’t to report the news, it’s to sway public opinion. With cancer like that comes a huge drop in respect and trust. Must say, I have a difficult time understanding why anyone would think sleaze is good for any organization — organized crime included. [For figures on how much faith the public has in the news media, go to ‘Media Trust Hits All Time Low’ at the end of this post.]

As a long-time friend and media veteran [40-plus years’ experience] recently put it, “It’s called ‘paycheque journalism’ for a reason. Those with integrity need not apply.”

There was a time when people living in the so-called Free World pointed fingers at the Soviet Union [USSR] and the People’s Republic of China for media censorship, cronyism and, heavy-handed political correctness. We’re now looking slightly hypocritical.

Full disclosure: I am not a big fan of television news which I see as shallow, containing too much information and misinformation often spoon-fed by the establishment and the ‘Deep State.’ More often than not a TV newscast is embarrassingly one-sided. Long gone are the days when reporters presented the nuts and bolts of a story so viewers could decide what was going on. Today there is far too much ‘agenda-reporting.’ One would have to be a complete moron not to know that. 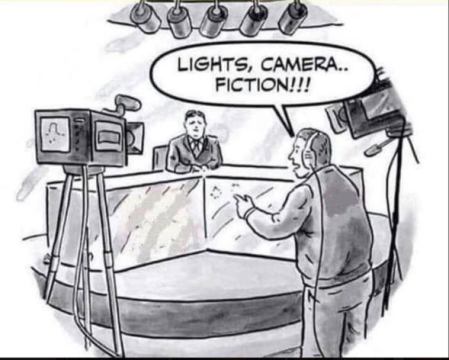 Sadly, some viewers don’t really give a rat’s ass about whether the news is accurate. What’s important to them is: does it fit our narrative? That is their only concern.

US President Donald Trump claims that news is 85 percent fake. Some disagree; they believe the number is higher. I do agree with legendary broadcaster Walter Cronkite who once shared that well over half our news is NOT covered. Walter made the comment more than 40 years ago. Because of the massive cutbacks to the news business, the current figure might be more like 95 percent. But … who really knows?

It wasn’t always like this. Journalism was once regarded as an honourable, trustworthy profession. The news game, mind you, has never been perfect. Some reporters went on junkets while failing to mention in their reports they were on the take. And here they were, doing stories on beat cops who accepted free meals …

Let’s face it, there are flaws and BS in every line of work … but on the whole — especially in ‘days gone by’ — reporting was fairly credible.

Oh. Here’s an important thing to remember about journalism in Canada: Some MAJOR news organizations receive millions of dollars in handouts from the FEDERAL GOVERNMENT. Corporate welfare at its finest. Otherwise, those news organizations would be bankrupt. Now they’re only morally bankrupt.

And just like that, reporters have gone from being guard dogs to lapdogs.

To save you from squinting, here’s what Fox News contributor Dan Bongino tweeted in early January 2021: ‘The Hunter Biden stuff about to come out is going to deeply disturb and shake you. Even more so than the troubling information which emerged a few months ago. Get ready, it’s ugly.”

Well, we’re ready. Let’s see the goods. This tick-tock stuff is starting to tick me off. And if more ‘troubling information’ is indeed released, will Americans again be victims of mass censorship?

Social media is not always helpful, to put it nicely. When it comes to credibility, it can be as bad — if not worse — than the mainstream media. It’s hard to summarize in a few words, but I’ll try. There’s both reliable information and some pretty strange stuff on social media. Beware. Anyone can be a ‘journalist.’

If one has the money [and therefore power], they can and will censor. When it comes to censoring those with different points of view, these sickos can virtually do what they want. Censorship, like class, is always an option.

HICCUPS THAT HAVE DONE JOURNALISM NO FAVOURS

IN BED WITH THE OPPOSITION

A January 28, 2021 story in True North Wire reveals that Canada’s CTV network broke an ethics code in a biased report on former President Donald Trump. A ruling by the Canadian Broadcast Standards Council found a CTV National News program that aired in September 2020 violated the code of ethics for Canadian broadcasters.

CTV‘s Bureau Chief in Washington, Joy Malbon, had stated that Trump called the coronavirus a ‘hoax.’ A viewer pointed out Trump never claimed the virus itself was a hoax — but rather that the Democrats’ politicization of the pandemic was. CTV admitted it had screwed up and apologized — but claimed the mistake was inadvertent and there was no intention to ‘spin’ the news.

That’s hardly real competition, but at least both networks save on accommodation costs.

Worker-coziness is no stranger to the news industry: Another example: CBC reporter Neil McDonald is married to CTV’s Parliamentary Bureau Chief Joyce Napier.

And we wonder why news stories are so similar …

WHAT CAN BE DONE ABOUT BIASED REPORTING?

Very little, unfortunately. Don’t hold your breath waiting for the news industry to clean up its act. It took years, but in Canada, the umbrella group of radio and television stations that claims to maintain industry standards finally issued its Code of [reporting] Ethics. Of the hundreds of radio and TV newsrooms across the country, only ONE ordered a copy of the code.

When I did a story on this, a brothel near Melbourne, Australia got in touch to say that a code of ethics was proudly posted in its lobby. And no, I haven’t stopped by to verify that … 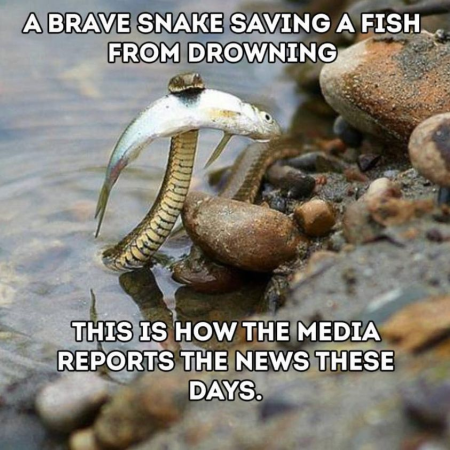 Consumers of news can do their part by not buying into everything they see, read, and hear. Don’t be gullible, folks. Research. Ask critical questions. Find an alternative point of view that challenges your own views.

Let me conclude with this: When dining out at a restaurant, we take for granted the food we’re about to eat is not contaminated. Stop treating the news industry as if everything is safe to consume? Is it fair, honest, and above board? It may — or may not — be. The ‘Russian collusion’ fiasco is ample proof of the venom out there.

Take a good look at the ‘kitchens’ of these media outlets … see who is really running the show and ask yourself if you are being served the real stuff — or junk food. Or worse.

Be your own editor. You decide.

And for a humorous look at brown nosing within the news industry, give this piece a read … Kyle Smith of the National Review Institute.

11 thoughts on “Is Journalism Dead?”