Here are more aerial images of Campbellton, New Brunswick and area — this time featuring the beautiful fall colours the region is famous for.

The photos were taken in October 2017 using a small drone, the DJI Phantom 4 Pro.

CLICK on the images to see sharp, breathtaking views that’ll fill your screen.

Feel free to download a photo or two — or three — that tug at your heartstrings. You might like one as a SCREEN-SAVER … or for a homesick Downhomer living ‘away.’

At the very end of this post, there’s a short video of Sugarloaf Mountain and its colourful foliage. You have a choice of watching it in different degrees of sharpness: 720p, 1080p … and 2K — the last one being the best.

The same video clip has been posted on YouTube. It’s quite sharp … and beyond cool to view it in 2K in ‘full screen’ mode. It’s like “you’re there.”

Fasten your seat belt … we’re off to a special corner of Canada where nature doesn’t stop smiling.

1. The east end of Sugarloaf Mountain with stunning, beautiful fall colours! Can you spot the leaf-covered path? [October 2017]

2. Campbellton from high above the Restigouche Estuary [October 2017]

3. Campbellton’s waterfront has been nicely developed since I was a kid … I left in 1967 and we had nothing this nice back then. [October 2017]

4. An apartment complex right next to Salmon Boulevard with the Charles Van Horne bridge in the background. [October 2017]

5. The famous crosses on the face of Sugarloaf Mountain — after some trimming of bushes. [October 2017]

7. The Canadian flag on the Sugarloaf up close. If you’re wondering why the RCMP didn’t put up a larger flag it’s because the flagpole — a donation — isn’t big enough. The flag, flying high above the Sugarloaf, has fast become a Campbellton icon. [October 2017] 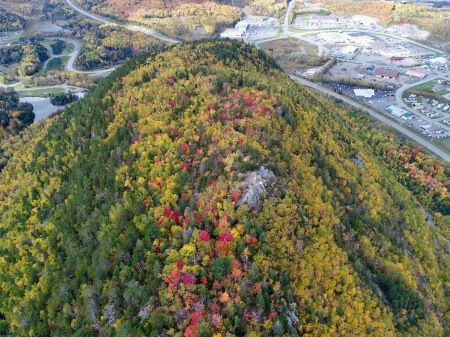 9. There are two flags on the Sugarloaf. Here’s the second, a tattered ensign suspended over a large outcrop of rocks at the eastern end of the mountain. The flag might not be there long. It’s ‘illegal.’ [October 2017]

10. The steel steps that help hikers get to the top of Sugarloaf Mountain. I didn’t realize the staircase was that long. Don’t let this put you off on climbing the path … the staircase isn’t steep like it appears. [October 2017] 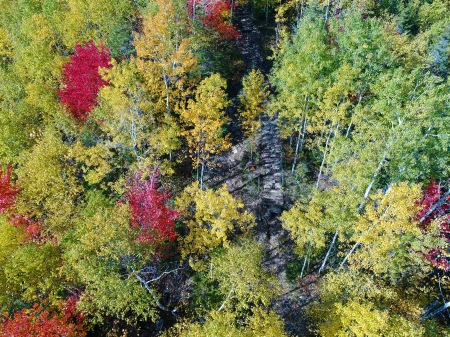 10b. Recognize anything down there? It’s the spot where large slabs of stone have been used to make a staircase. This is roughly the halfway point on the trail. [October 2017]

11. Nature puts on a show on the hiking trail up the Sugarloaf [October 2017]

12. The Terry Fox Memorial Trail cuts through a beautiful display of trees about to take a six-month nap. From overhead, it looks like coloured broccoli … or a flower arrangement … or that someone went nuts with photoshop. [October 2017]

13. The Terry Fox Memorial Trail shows the way to Sugarloaf Provincial Park. That strange hill to the right is Sugarloaf Mountain. [October 2017]

Can you spot three people on the Terry Fox Memorial Trail? [October 2017] 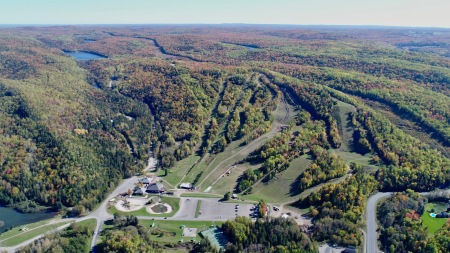 14. The sprawling Sugarloaf Provincial Park complex [October 2017]. The area covered by the park rangers is larger than Campbellton itself. 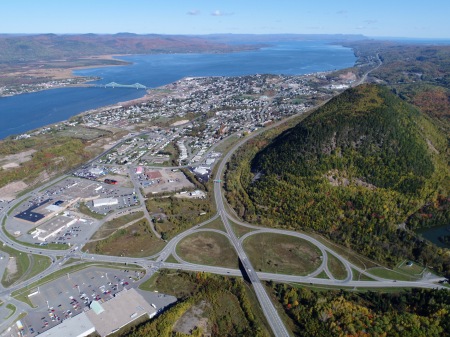 15. Campbellton [and part of Atholville] looking from west to east. The half cloverleaf is impressive. Take that, LA. [October 2017] 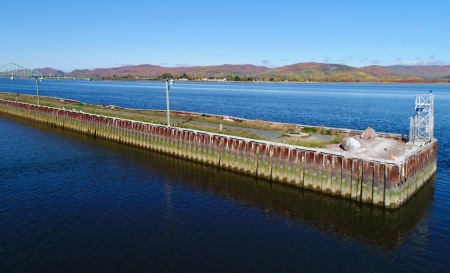 16. Campbellton’s wharf … in its day, a hub of activity with ships coming and going — but currently shut down.

18. Beauty and blight. The seldom-seen quarry just off Lilly Lake Road. The yellow payloader looks like a toy. [October 2017] 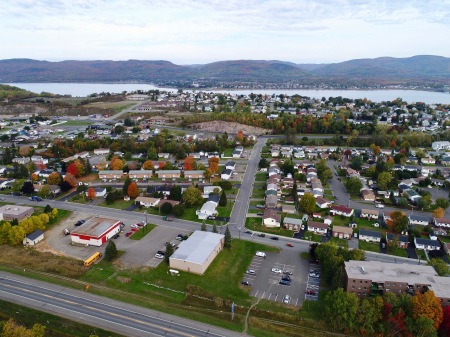 19. Harvey Meadows subdivision. Half a century ago, some of this was a race track. [October 2017]

20. Another sprawling provincial complex — this one for health care — the Campbellton Regional Hospital [includes a regular hospital, psychiatric facility and an addiction treatment centre]. Directly west of this multiplex is the Terry Fox Memorial Trail. [October 2017] 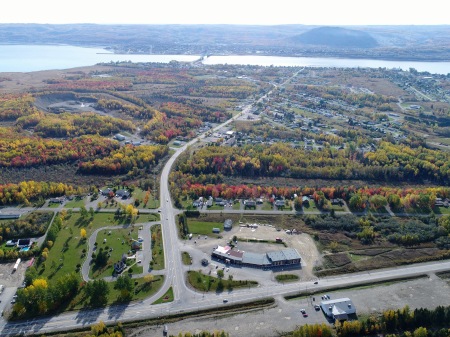 21b. There’s something very Claude Monet about this photo. A parking area about .2 km from the summit. ATV trails all over the place. [October 2017] 22. The western edge of Listuguj, a sawmill and a gravel road that leads to Indian Lake. [October 2017] 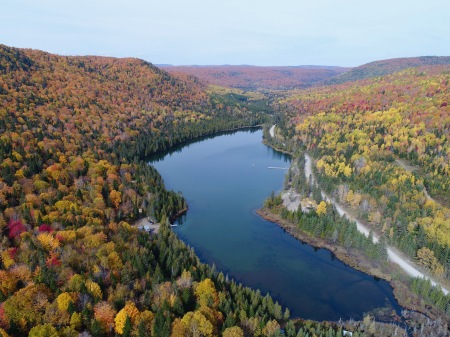 23. And this is Indian Lake. Seen from the side, it looks a bit like the outline of Australia. [October 2017]

24. Atholville: Here we find graves of the first European settlers to the region. The historical cemetery is sandwiched between the Restigouche River and the Pulp Mill. Some of those buried here were born in the 1700s. [October 2017]

25. At the pulp mill in Atholville: Tens of thousands of large logs — ex-trees — about to be turned into pulp, then paper. The stack is 20-25 feet high. This is an overhead shot, not a side view. [October 2017]

26. Tide Head Beach and its famous islands — home to so many delicious fiddleheads. [October 2017]

27. Tide Head … lower-left is Christopher Brook. Embedded in the front lawn of the white house [lower right] are cannonballs from the Battle of the Restigouche [England vs France] in 1760. That’s what’s wrong with the world today … no one fires off cannonballs anymore. [October 2017] 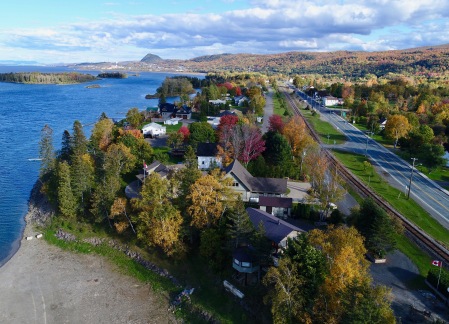 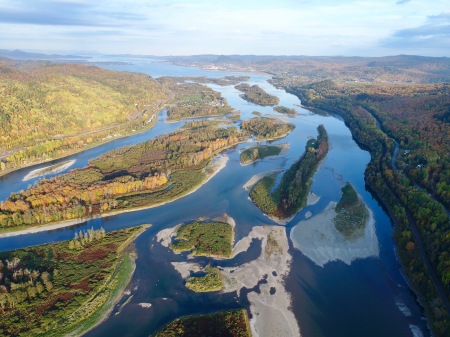 29. More of the Islands just west of Tide Head … some of these are privately owned. Quebec to the left, New Brunswick to the right. [October 2017] 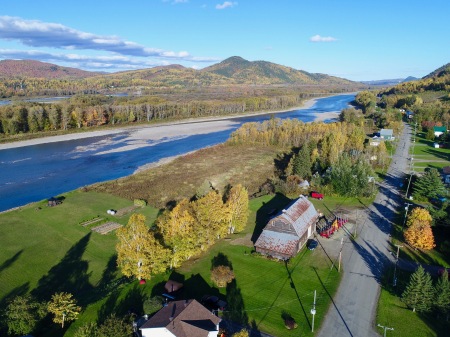 31. Flatlands, looking east … see the Sugarloaf? It may be the most photographed mountain in Atlantic Canada. [October 2017]

32. Casting long shadows, the evening sun sets on Flatlands. This is looking west towards the Matapedia Valley. [October 2017]

33. Sugarloaf Mountain, Restigouche River and thousands of trees in a spectacular show-and-tell. [October 2017]

This is the same video — but in better resolution — and it’s on YouTube.

Choose the highest resolution possible by going to the gear icon at the bottom. Then go ‘full screen’ by clicking on that squarish-looking icon, bottom right.