The stations are owned by Toronto-based Corus Entertainment, part of the Shaw Communications media conglomerate.

The veteran journalist was yanked off the air after he criticized his station’s lackluster coverage of the disastrous floods that have hit Southern Alberta. An international news story, the floods claimed a number of lives and sent tens of thousands fleeing from their homes. Damage is in the billions of dollars.

Turns out, Dave Rutherford was also a victim of that flood.

The “Official Website of the Rutherford Show” has now become a dreaded ‘404.’

Rutherford had a legitimate beef with his station’s coverage — or lack of it — of one of the biggest natural disasters to hit Alberta. Flood victims tuned in to CHQR in Calgary — but got Edmonton traffic and news instead.

Rutherford was not only entitled to his opinion, it was incumbent upon him to express it.

That was his job.

Former CBC announcer and producer Dennis Sherbanuk calls Rutherford’s exit a “defeat for media responsibility.” “Imagine,” he says, “there are flood waters outside your door and you can’t cover the story.” Sherbanuk adds, “Long-distance journalism doesn’t work. You have to get out of your newsroom to cover the stories.”

Rutherford is Not Alone

Freedom of speech can sometimes be a figure of speech.

In 1987, CBC sports announcer Dave Hodge was turfed after he tossed his pen in the air during a live broadcast of Hockey Night in Canada. Hodge was demonstrating his displeasure at a decision by someone in management to terminate live coverage of an NHL game between Montreal and Philadelphia — just when the game was heading into overtime.

Other broadcasters have been shown the door after being critical of decisions — some of them truly bonehead moves — made by management. It doesn’t mean they weren’t team players. It means they didn’t agree with shooting the puck into their own net.

When former CBC boss and journalist Wayne Skene wrote his 1993 book, ‘Fade to Black, a Requiem for the CBC’ — a critical look at the Canadian Broadcasting Corporation — he was denied an interview at CBC Radio in Edmonton, where Skene had worked about a decade earlier. Ron Smith, head of CBC Alberta at the time, said to reporters in the CBC Radio newsroom that he wasn’t going to have someone on air who was going to criticize the CBC. That was censorship.

One final about media censorship, but let’s face it, one could go on for days with examples of abuse. During a strike at the Shaw Conference Centre in Edmonton, not that many years ago, on-air people [including news reporters and news readers] at the Corus cluster of radio stations in Edmonton were ordered to change the name of the facility to the “DOWNTOWN Conference Centre” — as long as there was a labour dispute. Once the strike was over and peace restored, it went back to being called the Shaw Conference Centre. Only one on-air employee ignored the directive. The rest fell into line.

There are those who say that Dave Rutherford was “biting the hand that feeds him.” Those rules might apply to the military, say, but they do not apply to real journalism and to the ideals of serving a public. When the chips were on the line, Dave Rutherford’s loyalty wasn’t to management, it was to his audience. There’s something dangerous — yet courageous and noble — about that.

Rutherford has been in broadcasting since 1971. His reporting assignments have taken him around the world. He has covered everything from hurricanes in Nicaragua and in the United States … to wars in Kosovo and Afghanistan. He has contributed to every major media outlet from the BBC to CTV.

Macleans Magazine recently ranked him as #19 in the magazine’s Special Politics Issue, ‘The Power List, The 25 People Who Really Run the Country.’

Put it this way, Dave Rutherford was to information broadcasting in Western Canada what Wayne Gretzky was to hockey, except of course Wayne was center and Dave right wing. But political labels have nothing to do with what happened to the man. This is about the continued demise of journalism. When journalism goes in the tank, we all suffer.

Dave Rutherford’s last show was scheduled for Friday, the 26 of July 2013. Just last week Corus management in Edmonton put on a BBQ in Rutherford’s honour. In a matter of days things went from ass-kissing to ass-kicking. Such is the broadcast business.

Corus management has been quoted as saying they can’t discuss why Dave Rutherford was yanked off the air, telling reporters it was a “personnel” matter. According to Rutherford, the station manager told him he was off the air, but couldn’t tell him why … and that Corus’ legal department would be in touch with him.

Well, this is 2013. Maybe things are done that way nowadays.

As host of an open-line show, Dave Rutherford was hired to deliver thought-provoking comments about current events. It was irrelevant if the man was left-wing, center or right-wing. All that mattered was that he was honest with his opinions.

And he was. Rutherford was also described by some as overbearing with his point of view, to the point of being rude to some callers. Critics have called him a propagandist.

But he was also conscientious. I worked alongside Dave Rutherford during Corus’ coverage of the murder of four R.C.M.P. officers near Mayerthorpe, Alberta in March 2005. Rutherford was based in Calgary — 430 kilometers away — yet he was one of the first on scene, providing coverage that was superior to news organizations that had far more resources, such as the CBC. He was meticulous about what went to air, once asking if the police information I was passing on to him could be verified. This had nothing to do with Rutherford being “conservative” or right wing; the guy just wanted to get the facts straight. He wanted to serve his audience.

Click here to hear Rutherford’s comments that were broadcast on his show on Monday, 24th of June, 2013:

This was a defeat for journalism, and for all Canadians. There are no winners in this. [Audio courtesy of the Calgary Sun.]

When Rutherford was asked if he would have made the same comments if had he not been leaving in a month, his response was that he has no regrets about what he said.

What Can You Do?

If you’re not happy with what happened, what can you do about it? You have choices. You can get in touch with companies that advertise on the Corus stations in Western Canada and tell them you’re not doing business with them or buying their products as long as they support a radio station that muzzles free speech. As a consumer of news and other goods, you have that choice.

You can also dump your shares in Shaw Communications and Corus Entertainment.

If you support the company, don’t do any of the above. 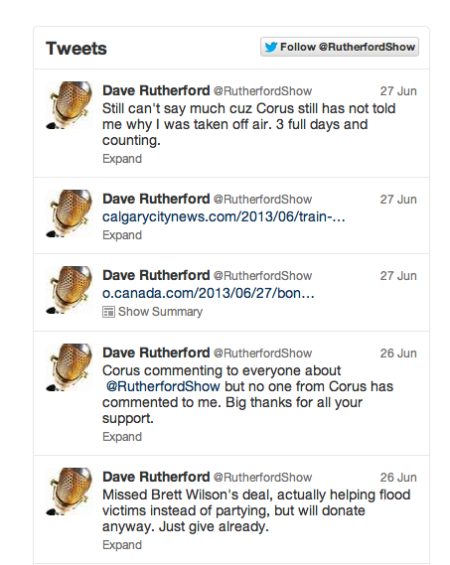 What is Rutherford’s Next Move?

In early October 2013, the Calgary Sun reported that Rutherford was returning to the airwaves in Calgary. It said the veteran broadcaster would deliver a daily commentary on 660News [an all-news station] starting Monday, 7 October 2013. 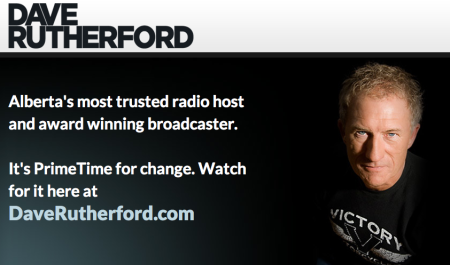 Note: the cover photo is courtesy of Wikipedia.